“The main aim of my project is setting a clear goal and enabling a group of young people to accomplish something spectacular. I did not want 27 children in Syafrubesi, Nepal to become photographers, but I wanted them to get courage. I wanted to empower them and help tem to find a way to achieve whatever they want to achieve, regardless of their economic situation.”

In order to prepare ‘The Story of Gosaikunda from the Eyes of the Kids from Syafrubesi’, we created a set of photographs illustrating a local story, Chogar and Chona, shared with us by a local shaman. A group of 27 young people living in Syafrubesi village in Lamtang region of Nepal were supervised by myself and Nyima Tamang a local activist. The young people also received some training from Kishor Dangol and Priya Tamang, both from Kathmandu, Nepal. 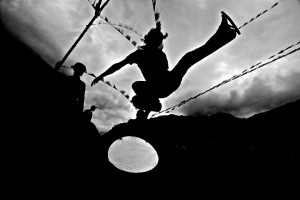 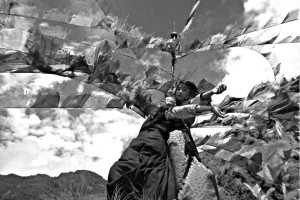 I collected in Poland and UK second hand digital cameras from different people and took them to Nepal and taught young people how to use them. Afterwards, during carefully planned sessions, we divided the story and prepared professional storyboards. We worked towards the plan, carefully designing every picture. We shot knowingly and used a variety of photographic means, playing with narrative sequencing and visual language of photography itself, carefully choosing the natural light or mixing it with artificial light, using long and short exposures, fake perspectives and so on. As a result, we created 20 pictures to illustrate the story.

The Gosaikunda Lake is situated at 4380 meters above the sea level. The lake is considered to be holy by Buddhist, Shamans and Hindu believers. The set of pictures illustrate the local story explaining the creation of the Gosaikunda Lake:

‘There is an amazing place nearby. Many years ago there was a village between hills. In this village, there lived two sisters, eldest was Chona and youngest was Choga. Once they set off to the jungle to fetch grass for the cows. They got very tired as they worked really hard. When they saw a beautiful place they decided to take a little rest there. When they finally set on to home, Chogar saw next, an even more beautiful place. Oh, how much she wanted to reach there. She started to walk. Suddenly, Chogar and Chona were no more together. No one knew where was Chona, Chogar was searching her so hard. Few months passed and Chogar was still searching for her sister Chona. Chogar was so tired searching, no where being able to find her sister Chona. Finally, in one place, she just sat. Chogar was searching days and nights and anywhere she could find any information about her lost sister. She had in her heart the true love for her sister. This love changed her into a Goddess. When she finally found her sister she was very happy. But when they started to talk, it came out that Chona found a place she really wanted to stay and she did not wanted to live anymore with Choga. Choga got really angry as she was searching her sister for all this time. But Chona’s heart was black and she did not care for her sister’s feelings, she just left to live by her own. Chona’s egoism made all her body black. Chogar said to Chona: “You may stay by yourself, anyway I will be always around. One day you will see.” Since then Choga become a respected Godess and all the people celebrated her. When the sisters time passed, they changed into lakes. Since then, every year during Janai Purima holidays, we come to the Gosaikunda lake to celebrate Choga.’

To set a clear aim and enable the group of young people to accomplish something spectacular is what was most important. I did not want 27 children in Syafrubesi, Nepal to become photographers but I wanted them to become courageous. I wanted to empower them, disregarding their economic situation, to be able to find the way and achieve things they want to achieve.

The project was financially supported by Polish Institute in New Delhi, Social Welfare Foundation, Syafrubesi as well as via a Kickstarter campaign supported by a group of individuals. I want to thank my local collaborator Nyima Tamang for help in running the workshops. I was also supported by volunteers from Kathmandu: Kishor Dangol, Priya Tamang and Prakash Sijapati.